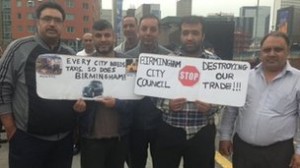 Some taxi drivers are striking over a “lack of spaces” for them near Birmingham’s New Street station.

As part of the £600m station revamp, the taxi rank has been temporarily moved to Navigation Street, which drivers said had spaces for 11 cabs.

Some drivers went on strike on Monday after drivers were fined for obstructing the highway.

They said a meeting with Birmingham City Council had ended without agreement.

Taxi driver Sajid Mahmood, a member of the Birmingham Hackney Drivers Union, said the drivers planned to strike every day between 08:00 and 11:00 BST indefinitely.

Network Rail said it was working towards an amicable solution.