Bride dies among five in US stretch limo fire 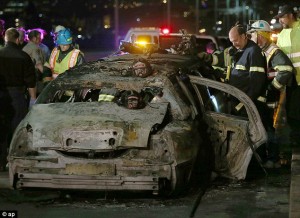 A newlywed among five women killed and four injured when a stretch limo turned into a fireball during a bridal party in San Francisco Bay.

Firefighters found five badly burned passengers in the back of the vehicle, which caught light on a major bridge in the city on Saturday night. Bride Neriza Fojas, 31, was among those who died in the unexplained blaze, her relatives told local media. The male driver and four other female passengers escaped the vehicle.

The driver was unhurt. One of the women had severe burns while the other three suffered injuries including smoke inhalation, police said. Two of the casualties, a 32-year-old and a 48-year-old, were in a critical condition in hospital on Monday, officials said. The deceased were so badly burned that medical examiners will try to identify them using dental records.

Aerial footage showed about one-third of the back half of the limousine had been burnt out. It is still unclear what caused the vehicle to burst into flames on the San Mateo-Hayward Bridge at the southern end of San Francisco Bay.

The limo was carrying one more passenger than allowed under the state rules, California Highway Patrol Capt Mike Maskarich said. But he would not comment on whether overcrowding had been a factor in the deaths. The cause of the blaze remains under investigation, and the vehicle has not yet been inspected, Capt Maskarich said.

Driver Orville Brown, 46, said one of the passengers had knocked on the partition and complained of smoke in the back of the vehicle. But he told the San Francisco Chronicle that he initially misheard her, amid loud music from the passengers’ compartment, and thought she was asking for permission to smoke.

By the time he realised something was wrong and pulled over, “within maybe 90 seconds”, the hired Lincoln Town Car was engulfed in flames, he said. “I just wish that I could have done more,” Mr Brown told the Chronicle. “It’s something you never imagine will happen.”

The women were reportedly picked up by the limo in the city of Oakland and were being driven across the bridge to Foster City. They had been on their way to a hotel to celebrate with the husband of the new bride, her sister told the Chronicle. Neriza Fojas, from Fresno, California, was planning to repeat her marriage vows in the Philippines next month, relatives told the San Jose Mercury News.

San Mateo County Coroner Robert Foucrault was quoted by the Chronicle as saying: “This is one of the most horrific things I’ve seen in 21 years with this office. “Looking at it, they were on top of each other and doing what they could to get out.” He said all the women were nurses.

Limo Stop, the firm that operated the vehicle, issued a statement saying it would “do everything possible to investigate and assist authorities in determining the cause of this fire in order to bring forth answers and provide closure to victims and their families”.

The San Mateo Fire Department and police are investigating the cause of the blaze. The coroner said the authorities did not suspect anything criminal occurred.

Previous: Woman killed while she was paying for taxi in Bradford
Next: Murder case: Police sends text to 500 taxi drivers over death of pilot Steven Barrett