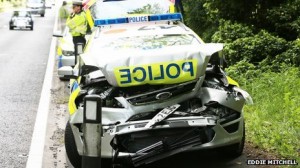 Four police cars and several other vehicles have been damaged after a van failed to stop for police in Sussex.

Officers had been alerted to the grey transit van being driven erratically in North Street, Brighton, at about 15:45 BST on Sunday.

During a police pursuit it was involved in a number of “damage only” collisions with police and private vehicles.

It was eventually brought to a stop on the A27 at Selmeston using stop sticks to puncture its tyres, police said.

A 35-year-old man was arrested on suspicion of dangerous driving, driving under the influence of drink or drugs, failing to stop and theft.

Another man was arrested on suspicion of being carried in a stolen vehicle.