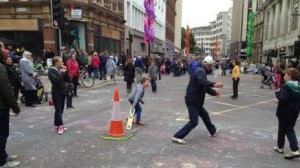 Roads in part of Bristol city centre have been closed in the city’s first car-free Sunday.

But he has hailed the day a great success and said he is not concerned about the critics.

It is the first of five monthly events – costing a total of £195,000 – aimed at opening up the centre of Bristol for pedestrians.

Mr Ferguson said: “This is all about the people, cities are made up of people, not buildings and cars, and this is a wonderful demonstration and wherever I go I have been stopped by people being enthusiastic about it.

“If it has worked like this in this weather, it is going to be absolutely tremendous in finer weather.”