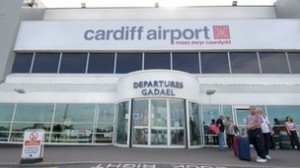 A bus service which operates four times a day to Cardiff Airport is to be scaled back.

Cardiff Bus is dropping the Sunday X91 service from next month as part of the company’s review of its timetables.

Opposition parties said transport links to the struggling airport should be improved, not cut, and it was “terrible news” for surrounding communities.

Cardiff Bus said it was too “commercially sensitive” to comment further.

But Gareth Stevens, business development manager at the bus firm, confirmed the Sunday service will end.

He added: “Cardiff Bus is however pleased to confirm it will be maintaining its Monday to Saturday services to the airport.

“We cannot comment further on this as it is commercially sensitive.”

The Welsh government agreed a deal to buy the troubled airport in March after a slump in passenger numbers. bought for £52m.

Figures for the year up to March 2013 show the number of passengers who used Cardiff Airport dropped below the one million mark for the first time in recent years. It’s peak was two million in 2007.

Eluned Parrott, Welsh Liberal Democrat AM for South Wales Central, said her party had been calling for a direct and high quality route between Cardiff city centre and the airport for many years.

Previous: 18, Man, arrested in hospital after Dunmurry hijacking bids
Next: A Taxi driver dies in embankment crash in Walsall