Driverless cars to be tested on UK roads 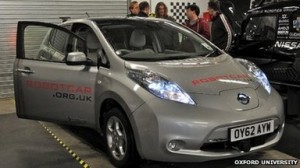 Driverless cars will be tested on public roads by the end of 2013, says the UK government.

So far, UK trials of the autonomous vehicles have taken place only on private land.

Driverless cars are guided by a system of sensors and cameras and are seen as potentially safer and more efficient than regular vehicles.

As a safety measure, a back-up driver will ride along during tests who can take over in case of emergency.

The plans have been unveiled in a blueprint by the Department for Transport, as part of a £28bn investment in British roads to reduce congestion. The report says driverless vehicles are capable of driving on their own “using knowledge of the environment in which they are driving”.

“They maintain a safe distance from the vehicle in front at a set speed and without deviating from their lane – all without the driver’s input,” said the report.

For now, the cars will be driven on lightly-used rural and suburban roads in a “semi-autonomous” mode which gives human passengers the choice to intervene.

They will be tested by the same team of Oxford University researchers who have been developing and testing autonomous car technology on an adapted Nissan Leaf around Oxford Science Park.

The technology uses lasers and small cameras to memorise regular journeys like the commute or the school run.

Prof Paul Newman, who leads the Oxford team, told the BBC he was excited by the public trials in the UK. “It’s a great area to be working in because it’s IT and computers and that’s what changes things. The British government sees that engineering is important.”

The UK announcement follows public trials in other parts of the world. The US is leading the way, with three states – Nevada, Florida and California – all passing legislation around autonomous cars.

Tagged with: Driverless cars to be tested on UK roads taxis news