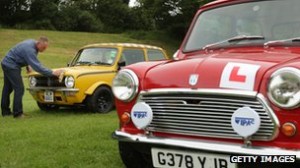 Learner drivers in the UK should face a graduated system of licences to help reduce road deaths, says a report by the RAC Foundation.

The study suggests that hundreds of lives a year could be saved if such a system were adopted.

New drivers would face a four-year learning period during which they would be subject to restrictions.

The RAC Foundation said such countries had seen a significant reduction in the number of young people being killed in accidents.

“Putting a firm number on casualty reduction is hard because of the pick-and-mix approach to graduated licensing,” said Prof Stephen Glaister, director of the RAC Foundation.

“But the evidence suggests that a full package of measures could reduce fatalities by anything up to 60%,” he said.

In the UK, one in five novice drivers has an accident within six months of passing their test.

In 2011, more than 1,500 young drivers were killed or seriously injured, a rate of four a day, said the Foundation.

Tagged with: Driving licences should be graduated taxis news

Previous: Driverless cars to be tested on UK roads
Next: Moray warning over bogus taxi drivers operating in Buckie