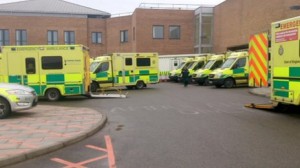 An ambulance service criticised for not meeting response targets is putting patients at risk by using under-qualified staff, the BBC has been told.

However, he said they did not attend serious 999 calls without NHS back-up.

However, two medical staff working in the region have criticised their use, saying some staff are not as well-qualified and vehicles not as well-equipped as the NHS equivalents.

One said: “In private crews, you can have two emergency care assistants, who very often only have the equivalent of a first aid at work certificate.

“They are sent to RTCs [road traffic collisions], heart attacks – every job we get called to.

Another told the BBC: “There are different grades of staff within the private ambulance service.

“There are more and more – basically bus, taxi and courier companies – entering the private ambulance market.”

Denise Bourke, from the Act on Ambulances Campaign, a pressure group set up by members of the Norfolk Labour Party, said: “It’s really very worrying.

“I am surprised we have not had more deaths associated with what is now a toy-town service.”

However, Mr Storey said: “I would like to reassure people we have a very stringent accreditation process in place for all of our private ambulance services both operationally and clinically… to ensure those staff are fit to do the jobs that we employ them to do.”

He said private staff were used to “support front-line staff” and to transport patients who did not require “blue light vehicles”.

“They are trained to lower standards than the NHS staff, depending on the types of responding vehicles we are using,” he said.

Last month the trust announced plans to spend £16.3m on upgrading its fleet of ambulances and response cars.