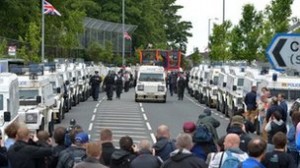 The first talks between the Orange Order and north Belfast nationalists have ended withoutest agreement.

The talks were arranged in a bid to avoid a repetition of disturbances that marked previous 12 July Orange parades in the Ardoyne area.

A residents’ spokesman described the talks as significant but added that they had been initiated too close to Friday’s Orange march.

The Orange Order said it was willing to continue with the talks in the future.

The negotiations were organised after a loyalist residents’ association asked three north Belfast lodges to engage directly with the Crumlin and Ardoyne Residents Association (Cara).

The area had been the scene of serious rioting in previous years. Nationalists had objected to Orange marches in the area while Orangemen continued to use what they termed “traditional routes”.

A spokesman for the County Grand Lodge of Belfast said on Monday that the two days of talks had been “comprehensive and frank”.

“Those present also articulated the interests of the local unionist community and discussed issues expressed by nationalist residents, as the delegation sought to understand why the parade was opposed.

A Cara spokesman said their first talks with the Orange Order were “fairly significant” but he did not believe a solution “was possible in terms of this Friday”.