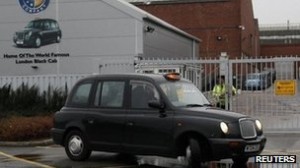 A Coventry-based black taxi manufacturer is to sell 400 cabs to Saudi Arabia.

The London Taxi Company has secured a deal with Ujra Holding Company for 200 black taxis after it initially ordered 200 in assorted colours.

Chinese car maker Geely bought the company, formerly known as LTI, for £11.4m in October, when the former owners went into administration.

The company said all vehicles are on target for delivery by the end of the year.

Previous: Royal Mail To Be Floated On Stock Exchange
Next: Driverless cars to be tested on UK roads