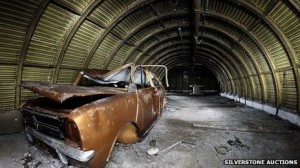 A car hidden for more than 30 years is to be auctioned after being left in a tunnel under the factory where it was built.

The Mini was used by workers to travel around the car plant at Longbridge in Birmingham but was dumped in the late-1970s after it was damaged.

It was saved by a former factory worker last year and will be sold in July. Auctioneers Silverstone Auctions said it needed “much love and attention to return it to its former glory”.

Nick Whale, from the auctioneers, said the car was missing its engine and gearbox.

Despite that he described the Mini as a “global icon” and could make more than £5,000, as the last car to leave Longbridge.

He said the decision to auction the vehicle had “caused a fair amount of controversy,” with some people preferring it was left in the tunnels as a hidden memorial.

Gemma Cartwright, organiser of the Pride of Longbridge rally, said she would have liked the car to stay on site, where former factory workers are trying to set up a museum.

“I say give it to the community where it’s been made,” she said.

Previous: Private Hire and Taxi Exhibition Manchester 2013
Next: London buses made in Ballymena travel to Manhattan with PM