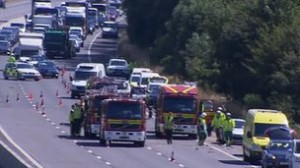 At least two people were thrown from a minibus when it crashed following a suspected tyre blow-out on the M3.

A woman remains in a serious condition after the vehicle carrying 10 people crashed on the southbound carriageway between junctions five and six at Old Basing.

Officers said the group were all from Romania and were on holiday.

Police said the minibus overturned after it crossed the carriageway from the outside lane and left the road.

It is believed to be the only vehicle involved in the crash.

Two men, aged 22 and 66, and a woman aged 63 suffered life-threatening injuries and were airlifted to Southampton General Hospital.

The two men are no longer in a serious condition, police said.

Other passengers were taken to the North Hampshire Hospital in Basingstoke by ambulance.

The affected carriageway was shut for more than four hours while the emergency services worked at the scene.