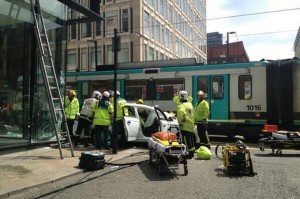 Graham Slater, 51, a taxi driver is banned from the road who caused a horrific city centre tram smash. He ignored two stop signs at the junction of Nicholas Street and Mosley Street and drove into the path of a tram. Firemen had to cut the roof off the private hire vehicle to rescue the two male and two female passengers. All four were injured while one of the women with fractures to her collar bone, spent two days in the Manchester Royal Infirmary.

After the lunchtime smash in June, the taxi was spun out of control which ended up embedding in a glass building on Mosley Street causing an estimated £5,000 of damage.

It was said that the driver of the tram slammed on his brakes but was unable to avoid the rear nearside of the cab. Nobody in the tram was injured but several people were left shocked.