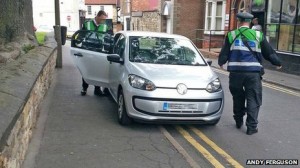 Two parking enforcement officers have been photographed parked on double yellow lines and a pavement as they ticketed a car and van in Lincoln.

The officers are allowed to park on double yellow lines in order to ticket people more quickly.

But the business owner who photographed them said there was no excuse for causing an obstruction on the pavement.

Lincolnshire County Council said the matter had been investigated and there was cause for them to park there.

But Andy Ferguson, who took the photo, believes there were two free spaces nearby where the officers could have parked instead.

“As well as being parked on double yellow lines they were causing an obstruction on the pavement, which has got everyone’s backs up a little bit more,” said Mr Ferguson.

“If someone had been going along in a wheelchair or with a double buggy then they wouldn’t have been able to get past.

“They would have had to go in the road instead.”

Mr Ferguson, co-owner of LA Reptiles, photographed the officers near his business in St Martin’s Lane on Sunday.