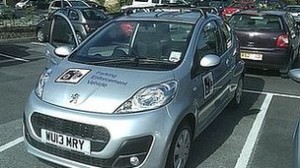 A mobile enforcement car is to be used in South Gloucestershire to catch drivers parking dangerously outside schools, bus stops and taxi ranks.

The car will operate seven days a week throughout the district from July.

A spokesman for the council said: “Rather than attached to the vehicle or handed to the driver, fines will be issued by post.

“All parking infringements will be checked by a parking enforcement officer before a penalty charge notice is issued.”

Councillor Claire Young, from South Gloucestershire Council, said: “While most road users park safely, some do occasionally park dangerously in restricted areas and the message is that if you continue to do this, you will receive a fine.”

“Road users particularly need to be aware that driving away when the parking enforcement car approaches is not a defence, because their details will already have been recorded,” she added.

A mobile enforcement car, introduced in Bristol last year, led to 510 penalty notices being issued in the first two weeks of operation.