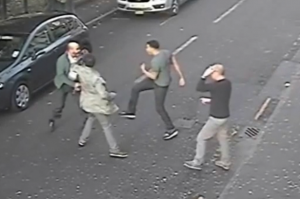 He was taken to hospital in an ambulance after the attack, just after he had completed his shift on Sunday afternoon

This is the incident a taxi driver was attacked by yobs – after he denied to order them a cab saying they were too voilent.

Mohammed Arshad aged 48, was rushed to hospital in an ambulance when he was attacked by the men. It happend when he finished his shift on Sunday afternoon.

The men were still outside the taxi office, 10 minutes after being denied the service, in Bloom Street in Manchester city centre.

Mr Arshad was punched by one of the men outside the door and dragged across the street to a car park in Sackville Street.

One of the men then threw a metal barrier which hit Mr Arshad in the face while several members of the taxi firm staff tried to defend him.

He was taken to Manchester Royal Infirmary with injuries to his face including a puncture wound to his right cheek, a cut above his left eye and severe bruising to his left.

Mr Arshad was too shaken to talk about his ordeal. The men ran off towards Princess Street after the incident and were later seen close to the Abingdon Street. One was skinny and the other well designed and muscular. Each had Manchester accents. The incident happened the time before 3 pm on Sunday.

Previous: Taxi driver who drove into family left suicide note
Next: Taxi driver robbed in severe attack after picking up fare from Shoreham