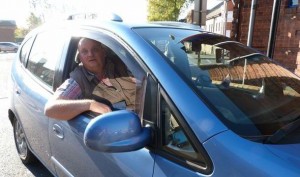 David Neil, a taxi driver was grabbed round the neck in the vicious assault as his cab careered along at 30mph.

One of the gang jumped out of the moving vehicle as it swerved across the street, hitting curbs.

When Mr Neil, from Burbage finally managed to stop, the three remaining attackers broke door handles in order to escape.

Two fled with the 49-year-old’s takings, but he managed to detain one of the men by sitting on him.

Police arrested the suspect and his accomplices, who were caught later, and the gang were handed over to UK Border Control.

Speaking to the Hinckley Times, Mr Neil said:  “I was still driving when one of them in the back put his hands round my neck and tried hauling me out of my seat.

“Another chap in the back was grabbing at the steering wheel and another one was punching me. It was terrifying.

“Then the one in the front tried jumping out of the car as it was moving, I went to pull him back and he sank his teeth into my hand and I had to let go. Read more