Unmasking cheats in the driving test 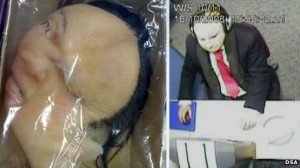 Driving tests are a fraught necessity for UK residents who want to drive legally on the roads – but they can also be a money-spinner for organised crime gangs.

Some people who do not believe they can pass the test – or those who simply want the UK driving licence document without the effort – are prepared to pay hundreds of pounds to cheat the system.

And it is not just the practical test that falls prey to fraudsters; the theory examination has proved open to abuse.

In one bizarre case, Guillaume De Vendrines, a man in his 30s, wore a latex mask to impersonate a 60-year-old candidate for whom he was trying to sit the written test all drivers must pass.

He later pleaded guilty to fraud and was fined £1,500 by Croydon magistrates.

This risk to British roads is taken very seriously by the Driving Standards Agency (DSA) and its team of 30 fraud investigators.

Behind an unassuming smoked glass door in Nottingham the team’s leader, Andy Rice, describes the problem of fraud as “significant” and “serious”.