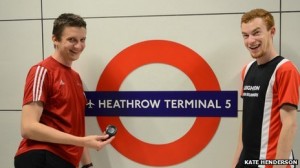 The record for visiting all 270 London Underground stations in the quickest possible time has been broken by eight minutes.

It is the second time Mr Marshall has held the record, after a total of 25 attempts.

“You have to get off one line and run to the other,” Mr Marshall said.

“We run from Cockfosters to High Barnet so it’s a combo of athleticism and the ability to decode a Tube timetable.

“People tar you with a trainspotter brush, but I’ve never written down a train number in my life.”

The pair’s attempt was completed on 16 August, but it took Guinness World Records more than a month to verify their record.

Previous: Edinburgh Trams Services will be running by next May
Next: Taxi driver heartbroken after only cab is stolen in Maldon