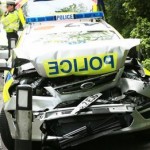 Courtesy: BBC NEWS Four police cars and several other vehicles have been damaged after a van failed to stop for police in Sussex. Officers had been alerted to the grey transit van being driven erratically in North Street, Brighton, at about 15:45 BST on Sunday. During a police pursuit it was involved in a number of “damage only” collisions with police ... END_OF_DOCUMENT_TOKEN_TO_BE_REPLACED