Edinburgh Trams Services will be running by next May 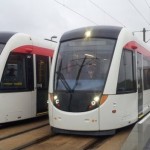 Edinburgh’s Trams will be running by May 2014, the city council announced. According to the council statement, the capital’s streets would be clear of roadworks by 19 October after six years of construction. Tram testing process between the airport and Edinburgh Park will begin earlier in the month. Test trams will be running along the entire route to the city centre ... END_OF_DOCUMENT_TOKEN_TO_BE_REPLACED