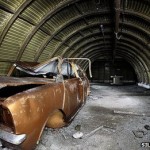 A car hidden for more than 30 years is to be auctioned after being left in a tunnel under the factory where it was built. The Mini was used by workers to travel around the car plant at Longbridge in Birmingham but was dumped in the late-1970s after it was damaged. It was saved by a former factory worker last year and ... END_OF_DOCUMENT_TOKEN_TO_BE_REPLACED