Man hit by bus in Glasgow 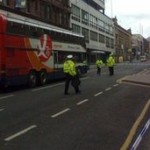 Courtesy: BBC NEWS A 77-year-old man is in a serious condition in hospital after being hit by a bus in Glasgow, police have said. It is thought that the man had been crossing Sauchiehall Street when he was struck by the vehicle. Emergency crews were called to the scene of the crash, between Newton Street and Holland Street, at 17:30 ... END_OF_DOCUMENT_TOKEN_TO_BE_REPLACED