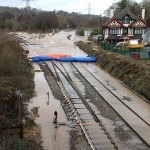 Network Rail South West flooding compensation cost revealed By Chris Ellis Courtesy: BBC News Online, South West  Railway line flooding – described as the worst in a decade – on the south-west of England’s rail network has resulted in about £12.5m in compensation being paid. The payments, from Network Rail, were made to train and freight operators because services could ... END_OF_DOCUMENT_TOKEN_TO_BE_REPLACED