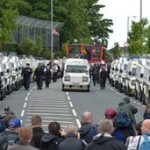 Courtesy: BBC NEWS The first talks between the Orange Order and north Belfast nationalists have ended withoutest agreement. The talks were arranged in a bid to avoid a repetition of disturbances that marked previous 12 July Orange parades in the Ardoyne area. A residents’ spokesman described the talks as significant but added that they had been initiated too close to ... END_OF_DOCUMENT_TOKEN_TO_BE_REPLACED