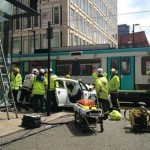 Graham Slater, 51, a taxi driver is banned from the road who caused a horrific city centre tram smash. He ignored two stop signs at the junction of Nicholas Street and Mosley Street and drove into the path of a tram. Firemen had to cut the roof off the private hire vehicle to rescue the two male and two female passengers. All four were injured while one ... END_OF_DOCUMENT_TOKEN_TO_BE_REPLACED