Tiny lines have been painted on Caxton Street in Westminster, London
Westminster City Council are ‘not happy’ with botched job done by contractors

Motorists are often caught out for parking where they shouldn’t.

But drivers would be hard pushed to squeeze themselves on to these double yellow lines which measure just over nine inches.

The shortest double lines in the UK, they have been painted between a taxi rank and parking bays in Westminster, London.

‘But on this occasion we can see how absurd this looks and we will make sure it is corrected.’

Bungling workers painted a no-parking zone outside Workington Community Hospital because they were using maps from before it was built. 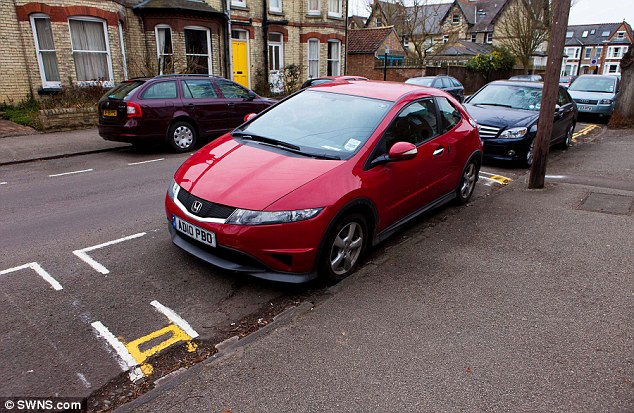 Earlier this year, double yellow lines stretching for just 13 inches were discovered on a street in Cambridge.

The lines were painted on a gap between parking bays in Humberstone Road, West Chesterton, by Cambridgeshire County Council.

A representative from the council described the lines as ‘common practice’, saying at the time:‘The yellow lines are at either end of a disabled parking bay and are there to prevent vehicles parked either side from encroaching on the disabled bay’.