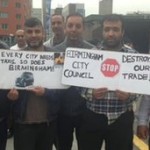 Courtesy: BBC NEWS Some taxi drivers are striking over a “lack of spaces” for them near Birmingham’s New Street station. As part of the £600m station revamp, the taxi rank has been temporarily moved to Navigation Street, which drivers said had spaces for 11 cabs. Some drivers went on strike on Monday after drivers were fined for obstructing the highway. They ... END_OF_DOCUMENT_TOKEN_TO_BE_REPLACED